Pretending World Cup is not on : Hazlewood 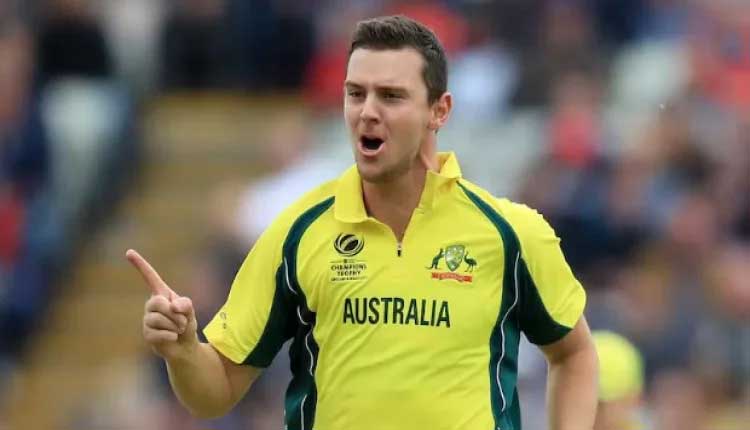 Brisbane : Policenama Online – Not part of Australia’s World Cup squad, pacer Josh Hazlewood says he is trying to pretend the mega tournament is not taking place, rather focusing on the upcoming Ashes.

It was deemed that Hazlewood did not have the required match fitness to be selected for the 15-member World Cup squad after suffering a back injury in January.

With Australia navigating their way through the early part of the tournament in England and Wales, Hazlewood is currently at the Bupa National Cricket Centre here as part of a week-long training camp with the Australia A squads.

“I’m trying to focus on what I’m doing up here,” he told cricket.com.au. “I’ll sit down at night and watch a couple of overs but I’m trying to steer clear of it a little bit.

“The more you watch something, the more you probably miss it. So I’m just trying to pretend it’s not on, to a degree.”

Hazlewood said the timing of his injury is what is more frustrating, just ahead of the World Cup.
“It’s a tournament that only comes around every four years, and just purely the timing of the injury – that’s probably the most frustrating thing,” he added.

We had it all when we had ‘The Wall’: Dravid…

“To be fit now while it’s on, it’s hard to take that as well I guess.” Hazlewood also admitted he was under the pump physically during the 2015 Ashes in which he was just five Tests old.

“My body was fried. The first two, two-and-a-half (Ashes) Tests were really good – I took five wickets in each of the first two Tests, then three or four in the next one, and everything was going great.

“And then I think it wasn’t really my skill that let me down, it was my body; I really struggled through the back half of that third Test and then into the fourth.

“I’d just been used to bowling through summer, having a good break and then getting up again for the next summer, and I’d been doing that for three or four years.

“Then the first time you actually bowl through winter, everything just catches up with you, all the niggles from summer, and it’s like a snowball effect. The first time you do it is the hardest.

“I was reasonably happy with things though; I know I can do a great job when I’m physically pretty fresh and that’s how I’m going to enter this Ashes, so I’m looking forward to it.” Hazlewood has tasted considerable success in the 50-over format.

In the 77 ODIs Australia played between World Cups, Hazlewood (31 matches) was their most economical bowler with a runs-per-over figure of 4.85 (Pat Cummins second with 4.96 in 36 matches), while his strike-rate of 31.8 was only marginally behind Cummins (30.6) and Mitchell Starc (29.3 in 34 matches).

Polarization, weak set-up blamed for Congress rout in UP

Four-day Test is the way to go forward: Irfan Pathan

Ranveer to Kapil Dev : Now its our turn to make you proud with ’83’

20 Delhi-bound trains delayed due to fog

20 Delhi-bound trains delayed due to fog

Jan 18, 2020
New Delhi, Policenama Online - At least 20 Delhi-bound trains were delayed due to fog in several parts of Northern…
Prev Next 1 of 1,190
More Stories

We had it all when we had ‘The Wall’: Dravid…